Saint Nicholas the Wonderworker, Archbishop of Myra in Lycia 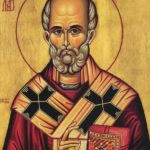 This glorious saint, celebrated even today throughout the entire world, was the only son of his eminent and wealthy parents, Theophanes and Nona, citizens of the city of Patara in Lycia. Since he was the only son bestowed on them by God, the parents returned the gift to God by dedicating their son to Him. St. Nicholas learned of the spiritual life from his uncle Nicholas, Bishop of Patara, and was tonsured a monk in the Monastery of New Zion founded by his uncle. Following the death of his parents, Nicholas distributed all his inherited goods to the poor, not keeping anything for himself. As a priest in Patara, he was known for his charity, even though he carefully concealed his charitable works, fulfilling the words of the Lord: Let not thy left hand know what thy right hand doeth (Matthew 6:3). When he gave himself over to solitude and silence, thinking to live that way until his death, a voice from on high came to him: “Nicholas, for your ascetic labor, work among the people, if thou desirest to be crowned by Me.” Immediately after that, by God’s wondrous providence, he was chosen archbishop of the city of Myra in Lycia. Merciful, wise and fearless, Nicholas was a true shepherd to his flock. During the persecution of Christians under Diocletian and Maximian, he was cast into prison, but even there he instructed the people in the Law of God. He was present at the First Ecumenical Council of Nicaea [325] and, out of great zeal for the truth, struck the heretic Arius with his hand. For this act he was removed from the Council and from his archiepiscopal duties, until the Lord Christ Himself and the Most-holy Theotokos appeared to several of the chief hierarchs and revealed their approval of Nicholas. A defender of God’s truth, this wonderful saint was ever bold as a defender of justice among the people. On two occasions, he saved three men from an undeserved sentence of death. Merciful, truthful, and a lover of justice, he walked among the people as an angel of God. Even during his lifetime, the people considered him a saint and invoked his aid in difficulties and in distress. He appeared both in dreams and in person to those who called upon him, and he helped them easily and speedily, whether close at hand or far away. A light shone from his face as it did from the face of Moses, and he, by his presence alone, brought comfort, peace and good will among men. In old age he became ill for a short time and entered into the rest of the Lord, after a life full of labor and very fruitful toil, to rejoice eternally in the Kingdom of Heaven, continuing to help the faithful on earth by his miracles and to glorify his God. He entered into rest on December 6, 343.