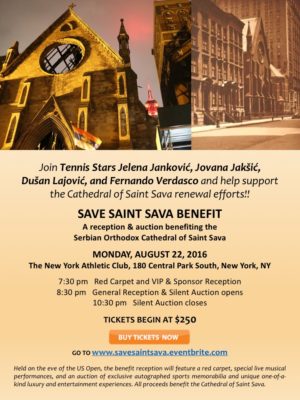 New York City – Tennis stars Jelena Janković, Jovana Jakšić, Dušan Lajović, and Fernando Verdasco will join other professional athletes, international dignitaries and media personalities to help support the “Save Saint Sava Benefit”on Monday, August 22 at the New York Athletic Club in Midtown. Held on the eve of the 2016 US Open, the event is a fundraiser for the Serbian Orthodox Cathedral of Saint Sava which was destroyed by a fire. The benefit reception will feature a red carpet, musical entertainment, and an auction of exclusive autographed sports memorabilia and unique entertainment experiences.

On the morning of Monday, August 22, some of the Serbian tennis pros will visit what remains of the Cathedral of Saint Sava. They will be joined by the Serbian Orthodox clergy and officers of the New York Fire Department (FDNY). The once grand 19th-century Gothic Revival building had been listed on the National Register of Historic Places since 1968. But on May 1, only hours after parishioners had celebrated Easter services there, the 161-year-old church was engulfed in flames. According to the FDNY, it took 168 department personnel to extinguish the four-alarm fire.

Since those first sad days following the fire, the community’s response has been clear: we must help the church in this time of need! Donations have been sent to the church and through avenues online, but the costs of renewing or erecting a new church will run in the millions. Thanks to the dedication of the benefit’s Host Committee and a generous group of sponsors which include Air Serbia, Breads Bakery, Waterpik, Guinness and Mamont Vodka, the benefit promises to offer guests unique opportunities to support the church’s renewal efforts through live and silent auctions and to enjoy Serbian music through performances by violinist Ana Milosavljević and jazz pianist VLADAN.

The “Save Saint Sava Benefit” Host Committee is led by Gordon Bijelonić, a Hollywood producer; Mark Jovanović, New York-based Real Estate Broker at Compass; Mirjana Sladić, Team Leader USA of the Novak Djoković Fan Club; and Dušan Vemić, coach of the 2016 Serbian Men’s Olympic Tennis Team. Bijelonić, Jovanović, Sladić and Vemić, were inspired to host the “Save Saint Sava Benefit” on the eve of the US Open as many of their associates from around the world will be in New York for the tennis tournament.

The “Save Saint Sava Benefit” will take place on Monday, August 22, 2016 at the New York Athletic Club, 180 Central Park South, New York, NY. The event will feature a red carpet and VIP reception for sponsors and special invited guests at 7:30 PM. The general reception and silent auction will be held from 8:30 – 10:30 PM. Tickets begin at $250 and are available online at www.savesaintsava.eventbrite.com. For sponsorship information contact Rachel Strader at (646) 883-8360 or SaveSaintSava@stsavanyc.org.