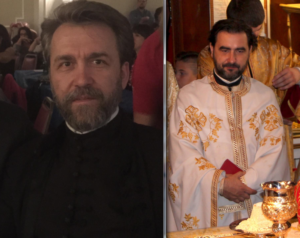 Please join us during Sunday service on August 21, 2016, at the General Theological Seminary of the Episcopal Church, as we welcome the new Dean of our Saint Sava Cathedral, Very Rev. Dr. Živojin Jakovljević and Very Rev. Fr. Vladislav Radujković.

Father Vladislav Radujković was born to a priestly family in 1973 in Banja Luka, Republic of Srpska. His father, Very Reverend Stravrophor Ratko Radujković, has been serving as the Dean of Banja Luka’s Cathedral and Bishop’s Deputy for many years. After the completion of Saint Sava Seminary in Belgrade in 1992, Father Vladislav enrolled into the Theological Faculty in Belgrade, from which he successfully graduated in 1999. Upon graduation, Bishop Jefrem ordained him a deacon and appointed him to serve at the Cathedral Church in Banja Luka, as well as coordinate the work with children and youth, where he served for eight years. In addition, Father Vladislav served as the Serbian Orthodox Church representative for communication with media in Republic of Srpska. It is worth noting that Father Vladislav has founded Saint Sava Orthodox Youth Association and a Saint Sava Cultural Club, and remained its General Secretary coordinator for many years. As a soloist of the famous Choir “Jedinstvo”, during international competitions, he has won numerous awards. Father Vladislav also pursued his education and in 2005 he earned a Masters degree in Public Relations at the Faculty of Communication in Banja Luka. Two years after his ordination to priesthood, due to health issues of his children, Father Vladislav came to the United States, where Bishop Dr. Mitrophan (Kodić) appointed him to Saint Sava parish in New York City. After four years of service at this parish, he was transferred to Serbian Orthodox Church of Saint John the Baptist in Paterson, NJ, where he served from October 1, 2012 to August 15, 2016. For the diligence that he demonstrated in his priestly duties, Father Vladislav was awarded a rank of protopresbyter in 2015.

We are grateful to have Father Živojin and Father Vladislav with us, and we pray that they will continue to serve our parish, with yet grater zeal to God’s glory and the benefit of His Holy Church and its people.