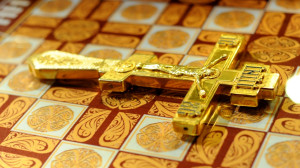 The very name of the Orthodox Church prescribes that her members correctly celebrate and confess their faith in Christ.  Orthodoxy is correctly understanding with the mind, truly believing with the heart, and correctly confessing with the tongue all that which God Himself has revealed about Himself, the world, and about man.  Orthodoxy is living a virtuous life according to the commandments set forth by God, for a faith unwitnessed by one’s acts is a dead faith, as is taught to us by Saint James the Apostle.  Further, the Lord reminds us that in the Last Judgment each of us will be given that which we merit according to our deeds.  Therefore, true faith must be shown in our good works, and our good works must be manifestations of our faith.

Our Lord Jesus Christ ordained His Church as a living witness to His participation in the history of mankind, and as an institution that evil cannot overcome.  The Holy Apostles spread the Holy Gospel, and there where these seeds were sown, a new church community or parish emerged.

Through her rich liturgical life and apostolic preaching, the Orthodox Church, contrary to other Christian confessions, has fully preserved the continuity of the ancient Church.  Her own live, historical path continues today, even after twenty centuries.  The Orthodox Church has millions of holy martyrs, confessors who witness her holiness.  Likewise, the Lord works innumerable divine acts, either by Himself or through His saints, and through these acts resolves that the Church is His mystical Body.  The Church is composed not only of clergy, but of all who truly believe in Christ, and through Holy Baptism have become members of His Body.  All righteous souls, whether living in the Lord or fallen asleep in the Lord, are a union of witnesses of Christ.

Throughout her difficult history, the Church of Christ has always emerged victorious over her adversaries and has overcome all battles and temptations.  In the first three years of her life, the Church was attacked from all sides by pagan emperors who systematically killed and imprisoned those who confessed faith in the Risen Lord as their Savior.  From this period, there are millions of holy martyrs and confessors of all ages, races and social classes who suffered for their holy faith.

In 313 AD, the Holy King Constantine the Great, in God’s foresight, issued a decree known as the Edict of Milan, forbidding the persecution of Christians in the Roman Empire.  With his mother, the Holy Queen Helen, he adopted the Christian faith, zealously helped in the organization of the Church and  defended the integrity of the Christian faith.

With the Edict of Milan, the Church of Christ enjoyed freedom of expression and movement, resulting in the crystallization of her teachings and dogma.  The period of 325 to 787 was one in which a number of incorrect teachings of the holy mysteries of Christ were propagated.  These teachings sought to depict Christ as something different from what He is – the Son of God.  Led by the Holy Spirit, the Church was able to expose these false teachings through the Ecumenical Councils, where the bishops of all sister churches met, and through prayer were able to ascertain the true teaching and reject the false. Through a total of seven ecumenical councils, and several smaller ones, the Church was able to concretely define and promulgate the faith that was handed down by the Lord through His apostles and their successors.  Due to this, the Church existed as One, Holy Catholic and Apostolic Church up until the middle of the eleventh century.

In 1054, the Great Schism divided the Church.  A gradual estrangement between eastern and western churches was noticeable in earlier centuries, but only in the middle ages did it culminate in this schism.  Differences in culture and language were the prime motivating factors in this process.  Constantinople, which was the capital of the eastern portion of the Roman Empire, was the center of eastern Christianity, while Rome was the center of western Christianity.  During the course of their cultural and political rivalry, it was a natural occurrence that theological differences would emerge.  Western churches sought jurisdictional control over the eastern churches that surmised that all churches were equal, and Roman bishops first among equals due to the size and importance of their episcopal sees.  For the eastern churches, the primary authority in resolving dogmatic and doctrinal questions was the ouncil of bishops representing all sister churches, and not a decree of one church or one bishop.  In later periods, the Roman church adopted more incorrect teachings, among which was the infallibility of the Roman Pope, which caused greater tension.

Protestant communities, which later evolved from the Roman church in protest against the Pope, further distanced themselves from the teachings of the Holy Fathers and the decisions of the Ecumenical Councils. Traditional Orthodox theologians do not recognize the spiritual nor salvific character of the western churches as long as they regard the Holy Spirit as leading their congregations. They do not possess the fullness of grace and spiritual gifts in that they gradually abandoned the holy teachings.

The Holy Orthodox Church is a union of so-called autocephalous churches with the Ecumenical Patriarch of Constantinople as first among equals of the leaders of the various sister churches, which with over 300 million believers all over the world witness the apostolic and patristic teachings.

The organization of the Orthodox churches is centralized with one patriarch, archbishop or metropolitan as head.  These titles are honorary.  All bishops are equal in grace received from the Holy Spirit. The number of autocephalous churches has changed throughout the centuries.  However, those that exist today are the following: Ecumenical Patriarchate in Constantinople (Istanbul), Patriarchate of Alexandria (Egypt), Antiochian Patriarchate in Damascus, Patriarchates of Jerusalem, Russia, Serbia, Romania, Bulgaria, and Georgia, and churches of Cyprus, Greece, Poland, Albania, and America.  There exist also autonomous churches that canonically are separate from their mother churches: Czech and Slovak churches, Churches of Sinai, Crete, Finland, Japan, China, and Ukraine.  From all of these churches, there exists in the diaspora a very large number of faithful all over the world who fall under the protection of their mother churches. The unity of all autocephalous churches in the diaspora confess the same faith, liturgical tradition, and all recognize Christ as the Head of the Church.

Today, the Orthodox Church passes on a priceless liturgical tradition which began in the earliest periods of Christianity.  The monastic movement, whose roots are in the third century, has defended Christianity and nurtured the whole of Orthodox spirituality.  The Divine Liturgy exudes a feeling of divine beauty and glory, creating a real feeling of Heaven on Earth.  Orthodox art and hymnography have a very important investment in the lives of Orthodox Christians in that they allow the bodily senses to witness the spiritual greatness of God’s mysteries.  Icons in the Orthodox Church, in addition to their artistic and esthetic qualities, have their own functional purposes, namely as windows to Heaven that allow us to experience the reality of God’s Kingdom here on Earth.