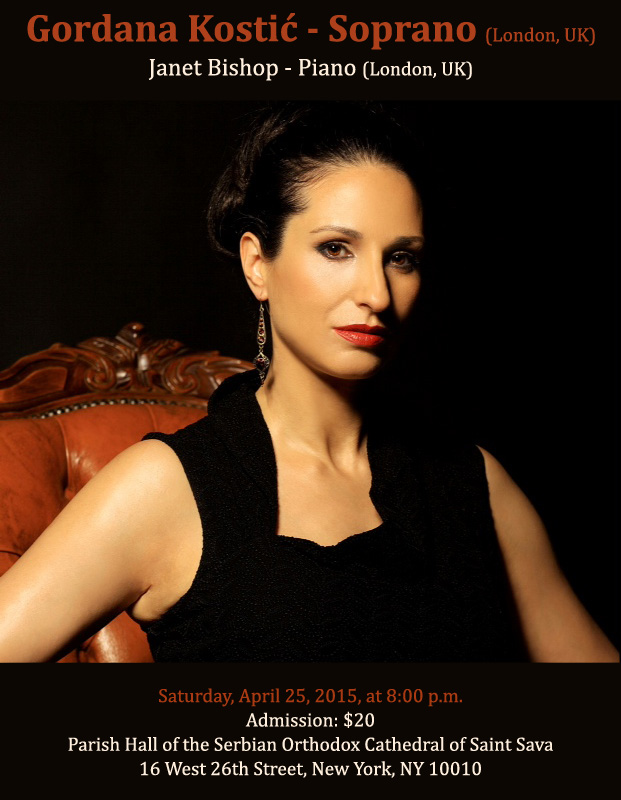 Join an International Opera Singer Gordana Kostić on 25 April 2015, at 8 p.m. at St Sava’s Church Hall (16 West 26th Street, New York, NY 10010), where she will perform a recital ‘Unhappy in Love’. The programme will include famous arias by Dvorak, Puccini, Bizet, Mozart, Verdi and many others with piano accompanied by Janet Bishop.

Janet Bishop studied at the Royal Academy of Music with Dennis Murdoch and Frederick Jackson and organ with C.H. Trevor, after obtaining a scholarship from her home county of Yorkshire.
Janet’s work encompasses different styles of vocal repertoire from Opera and Lieder to musicals, as well as a wide range of experience working with instrumentalists. In addition to concert work, she has been a member of The British Federation of Festivals, working for many years with several festivals, including those of Bromley, Beckenham and Blackheath. Janet has toured throughout the UK working for “Tano Rea Presents”, most recently playing for The Great Big Gilbert and Sullivan Show at the Grand Theatre in Swansea, “Spun Gold Promotions” and “Aspects of Opera” . For several years she was the pianist for “Grim’s Dyke Opera Company” in Hertfordshire. (Grim’s Dyke was W. S. Gilbert’s home ) and in recent years has been involved with Singers’ Summer Schools in Wales’ , as well as ‘Workshops for Singers.’ Janet’s future engagements among others include many more opera recitals with Gordana Kostić.