St. Sava Cathedral of New York City celebrated its temple’s patronal feast of St. Sava of Serbia on January 22, 2017. This was the first St. Sava celebration since the cathedral was severely damaged by fire. The most beautiful aspect of the slava celebration was the general atmosphere of delight which, thanks to the children of the Serbian School and the folklore group “Opancici,” prevailed in the hall of St. Eleutherios Greek Orthodox Church, which was so full that there were not enough seats for everyone.
Truly, wherever there are many troubles and difficulties, God’s grace is multiplied, as has been confirmed here in New York at every church service since the fire, including the first Liturgy with His Grace Bishop Irinej and the litija procession in the city itself in October, at Christmas, at Theophany, and at the St. Sava celebration.
In His Grace’s words, this was “an absolutely fantastic St. Sava celebration, where all the children are here together.” His Grace extended particular thanks to the Serbian Club, saying that its members “were wonderful hosts who prepared and donated all the food for the day,” and cited this as a magnificent example which should be emulated by all. At the end of the program the youngest folklore group “Opancici” presented the song “Tamo daleko,” remembering with this song our mutual brotherly ties with the Greek people who during the First World War welcomed the greatly suffering Serbian army on the island of Corfu. Now, when the St. Sava parish in New York has no place for its worship, the Greek Church often offers us their church and hall for services and gatherings, confirming the solidarity and unbreakable connection of these two fraternal and co-religionist peoples.

The “Opancici” Folklore Group Celebrates its Slava of St. Sava 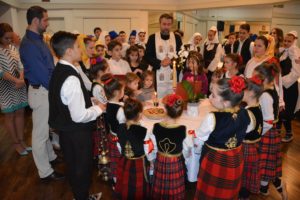 On Saturday, January 28, 2017, the “Opancici” folklore group celebrated its slava of St. Sava at the Serbian Club in Ridgewood. Together with many children and parents, the dean of the St. Sava Cathedral in New York, Protopresbyter Zivojin Jakovljevic, cut the slava kolac in the beautifully-decorated hall. In his greeting, conveying the heartfelt greetings of His Grace Bishop Irinej, he emphasized the importance of our youth for the future of the Holy Serbian Orthodox Church and Serbian people. In thanking Club president Goran Milutinovic, folklore group president Milica Kukic, kumovi Ivan and Marija Ignjatovic and all the parents, teachers and children, he stated that many value their tremendous work and devotion. Saying that the future of a nation depends on its present, that is, its children and youth, Father Zivojin thanked the parents who concern themselves with the religious and cultural education of their children and stated that the work of this organization in the church in New York truly has its future.
Thanks to the parents and to the management of the Serbian Club, our Serbian children are given the possibility of gathering twice a week, where they study Serbian music, dance, songs, faith, language and traditions. This is encouraging especially now, when the New York parish is going through a difficult time after losing its spiritual home, with which it will be faced until the church is restored.
Having this potential in mind, we appeal to all our teachers, parents and grandparents not to become discouraged and to continue to be involved in the education of their children and grandchildren, so that they may come to know their roots, their holy forebears and their Orthodox heritage as critical elements of their Serbian identity. We ask them to never forget that the goal of this teaching is to help our children grow up to be good people and good Christians, to the joy of us all and for the welfare of our Holy Church and people.